An interesting section that has remained relatively unnoticed so far shows film awards as well as prizes and presents given to individual persons or film crews. The stock includes objects of different shapes such as cups, plates, figurines, medals and certificates. Goldener Apsara vom Festival in Phnom-Penh für "Die gefrorenen Blitze" (1967)
Besides common awards like today's German Film Award, the Heinrich Greif Award, the National Award from the pre-1990 era and several festival awards (Karlovy Vary, Leipzig), curiosities can be found as well: A coal briquette made of plastic from the Cottbuss Days of Socialist Film, a "Golden Aspara" in the shape of a temple dancer from Phnom-Phen Festival for Die gefrorenen Blitze, a recognition award of the PLO and a Golden Space Shuttle from the Triest Festival of Utopian Film for Der schweigende Stern. 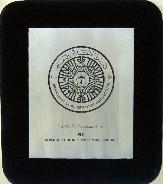